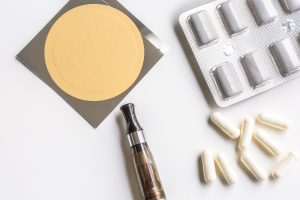 As most people are well aware by now cigarette, smoking is a high-risk addiction.  Cigarette smoking is the number one cause of preventable death in the United States and increases the risk of stroke, heart attack, COPD, asthma, diabetes and cancers to include lung, kidney, mouth, stomach, esophageal and pancreas.  Life expectancy for smokers is at least 10 years shorter than for non-smokers.  Fourteen percent of Americans smoke, but it is as high as 25% in some high-risk subgroups based on education, race and poverty status. Therefore, as a pulmonologist, I am keenly interested in ways that may help my patients quit smoking. Current FDA approved medications for smoking cessation include nicotine replacement therapy (Nicoderm, Nicorette, Nicotrol), bupropion (Zyban) and Varenicline (Chantix).  Unfortunately, these medications demonstrate disappointing one-year abstinent rates at about 20% with Varenicline performing slightly better at 26%.

The e-cigarette was invented to enjoy the benefits of inhaling nicotine while avoiding exposure to the tar or the toxic gases found in cigarette smoke. Electronic cigarettes are nicotine delivery devices using a flavored nicotine liquid that is heated into a mist which is inhaled or “vaped.” Although not approved by the FDA for this purpose, Americans are now using e-cigarettes as the preferred smoking cessation tool compared with nicotine replacement therapy. However, we know little about the effectiveness of e-cigarettes for smoking cessation or the short or long safety of such treatment.  In this week’s New England Journal of Medicine, a study conducted in the United Kingdom demonstrated that after one year smoking cessation was more successful with e-cigarettes (18%) as compared with nicotine replacement (9%). In addition the participants that used e-cigarettes had less cough and phlegm, no excess wheezing or shortness of breath and only a small incidence of irritation of the throat and mouth as compared with the nicotine replacement group.

A key finding in the study is that 80% of those who quit smoking using e-cigarettes were still using e-cigarettes after one year (only 9% of the nicotine replacement group were still using nicotine replacement). This fact raises concerns about the health consequences of long-term e-cigarette use.  A recent report by the National Academies of Sciences, Engineering and Medicine indicated that e-cigarettes were safer than traditional cigarettes, but stopped short of declaring e-cigarettes as safe noting that there are no long-term scientific studies.  This report cited that e-cigarettes have been shown to increase airborne concentrations of particulate matter and nicotine in indoor environments. In addition, there could be a greater number of metals found in e-cigarette vapor as compared to traditional cigarettes. Other reports have suggested that the propylene glycol and glycerol, the major components of e-liquids, may be chemically altered when heated by the vaporizer and be transformed into toxic compounds.

Long term use of e-cigarettes by adults may also expose children and teenagers to e-cigarette vapor as well as be a role model for addictive behavior.  The US Surgeon General has declared e-cigarette use among youth an epidemic and there is even greater concern that these devices will serve as a gateway to more addictive drug use. With the results of the New England Journal article taken into consideration, it is my opinion that there is insufficient data to support the use of e-cigarettes as first line therapy for smoking cessation. I recommend that e-cigarettes be used when other first line FDA approved therapies have failed (combined with behavioral counseling).  When e-cigarettes are used, they should be dosed at the lowest nicotine necessary to reduce cravings and there should be a clear timeline and discontinuation date for its use.