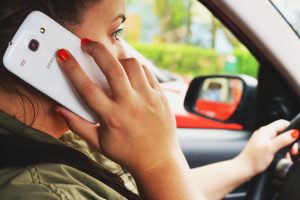 According to the National Highway Traffic Safety Administration, distracted driving causes more than 3,000 fatalities and over 400,000 injuries in the United States each year. At any given daylight moment across America, approximately 660,000 drivers are using cell phones or manipulating electronic devices while behind the wheel. Please don’t be one of them. April is distracted driving awareness month and we urge everyone to be aware of the dangers and risk.

It is not just texting, drivers are using apps like Facebook, Twitter, and Snapchat behind the wheel. Other distractions on the road include eating, applying makeup, adjusting the radio or music on a cell phone; additionally, it may also be something more subtle like talking to passengers or having a pet in the vehicle. In fact, anything that diverts attention from the task of driving is considered distracted driving.

Many people believe they are accomplished multitaskers. The truth is that the human brain cannot handle two thinking tasks at once. Rather, our brains must toggle between the tasks; consequently, neither you nor other drivers on the road are capable of being totally invested in driving and invested in talking on a cell phone at the same moment. One moment of distraction can be the difference between a crash and near miss. My life, your life and the lives of our loved ones may be in the palm of a driver’s hand.

An estimated 1 in 4 car crashes involve cell phones, according to the National Safety Council, and 34 percent of teen drivers have admitted to texting while driving; 52 percent have said they have talked on the phone. Ten percent of drivers under the age of 20 involved in fatal crashes were reported as distracted at the time of the crash.

Each person injured or killed is a mom or a dad, a sister or a brother, a daughter or a son. In April, during Distracted Driving Awareness Month, the challenge incumbent on all of us is to be part of the solution. Be mindful and present while operating any motor vehicle.

Everyone at Portneuf Medical Center encourages you to be aware and to be safe on the roads.

Drew McRoberts, M.D. is board certified in general surgery. He is a Fellow of the American College of Surgeons and is the Chief of Surgery and Trauma Director at Portneuf Medical Center. He has practiced in Pocatello since 1995