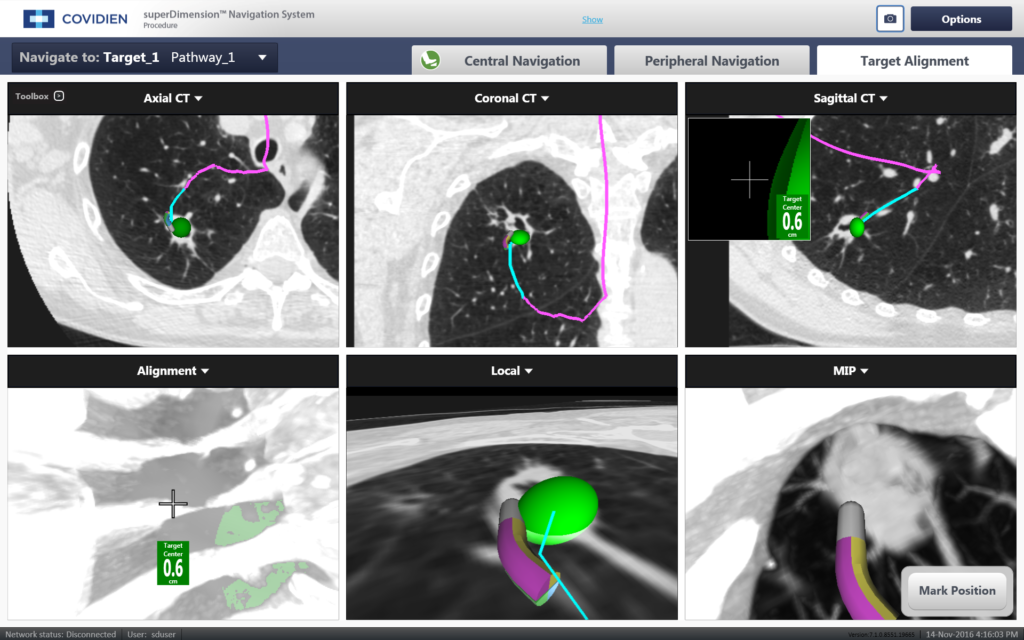 This is the navigational bronchoscopy image. The Computer guides the catheter to the spot as seen on the CT chest images.[/caption] Lung cancer is the leading cause of cancer death in both men and women in the United States. According to the American Lung Association, “the disease has been closely associated with smoking since 1964, when the first Surgeon General’s report concluded that tobacco smoke was a cause of lung cancer. Today, smoking is thought to cause up to 80-90 percent of lung cancer cases." Statistically, the five-year survival rate for a person diagnosed with lung cancer currently stands at around 16 percent as compared to an over 90 percent survival rate for breast, colon and prostate cancers. In the past few decades, screening for breast, colon and prostate cancers has proven to be instrumental in early detection, diagnosis and subsequently successful treatment of those cancers. Now, there is a test that can reduce death from lung cancer through early detection. The test is not recommended for everyone. You may be eligible for early screening if you: • Are a current smoker or if you have quit within the past 15 years • Have no current symptoms of a lung condition or a history of lung cancer • In the age group from 55 to 74 years old • And have smoked a minimum of 30 “pack years” We believe we can reduce the number of deaths caused by lung cancer by offering improved detection at earlier stages, when lung cancer is much more easily treated. Results of the National Lung Screening Trial (NLST) released in August of 2011 show that screening with a low-dose spiral computed tomography (CT) scans as compared to chest X-rays reduced lung cancer deaths among heavy smokers by 20 percent. If a spot on your lung is found, a new non-invasive technique called electromagnetic navigational bronchoscopy (ENB) is one of the tools we now use to diagnose lung cancer. ENB, an exciting technique, promises accurate navigation to identify lesions; it uses technology similar to a car’s GPS to locate areas of concern. If you or a loved one is interested in learning more about the screening or would like to schedule an appointment, please contact our Lung and Sleep Specialists.