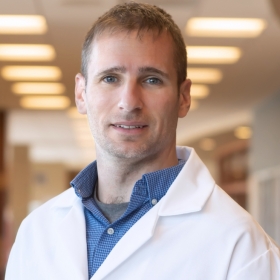 Kevin O’Halloran, MD is a board-certified orthopedic surgeon with sub-specialty fellowship training in trauma. Kevin’s medical journey did not begin immediately; born in Minneapolis, Kevin joined the Army in 1995 after graduating high school. He served as an enlisted man on active-duty for four years. He then transferred to the Army National Guard during college and in 2006, was commissioned as a second lieutenant.

Kevin began his post-secondary education at the University of Minnesota in Minneapolis, where he completed his undergraduate degree. He attended medical school at Georgetown University in Washington D.C.. After finishing medical school, Kevin completed his orthopedic residency at Montefiore/Einstein in the Bronx, NY. He did his fellowship training in orthopedic traumatology at the University of Maryland Shock Trauma Center in Baltimore.

Dr. O’Halloran first became interested in medicine in response to his desire to alleviate suffering through his work, while also pursuing his passion for science. However, orthopedics was not always on his radar. His interests changed after an international medical school rotation in Nicaragua in 2006. There, orthopedic trauma captivated his attention. He often met patients on their worst days and he saw how orthopedic traumatology not only helped save lives, but helped patients regain their function, or adapt to their new normal. For Dr. O’Halloran, ortho trauma gave him an opportunity to alleviate suffering through his work.

Kevin has deployed to Afghanistan and Iraq as an orthopedic surgeon where he cared for patients and soldiers suffering orthopedic injuries. He continues to serve in the US Army Reserves with over 27 years in service.

Kevin previously became fond of the western U.S. after living in El Paso, TX. Here in Idaho, he loves exploring Pocatello and the surrounding regions with his wife Caitlin and son, Otis. When not practicing medicine, he enjoys fishing, hiking, backcountry camping, canoeing, skiing, reading and traveling. As a part of the Portneuf medical team, he is excited to be developing an orthopedic trauma service to enhance the trauma care provided in Southeastern Idaho.

LEAVE A REVIEWSEE ALL REVIEWS

Dr. O'Halloran and his team are absolutely amazing! My mother was in a terrible accident and many would have amputated, but not Dr. O'Halloran and his team. They worked together and diligently to save her leg. 7 months later she is learning to walk again! We can't thank them enough for believing in themselves and her! In addition, they all have a great bedside manner!

Unfortunate to break my left ankle in three places, Dr O'Halloran performed the surgery, which mended my ankle, and now it's healed absolutely well. If it weren't for him, I may have lost my left ankle and foot altogether by amputation. In my opinion, he is a miracle worker. Many serious praises of thanks for this Doctor... He's Darn Good!