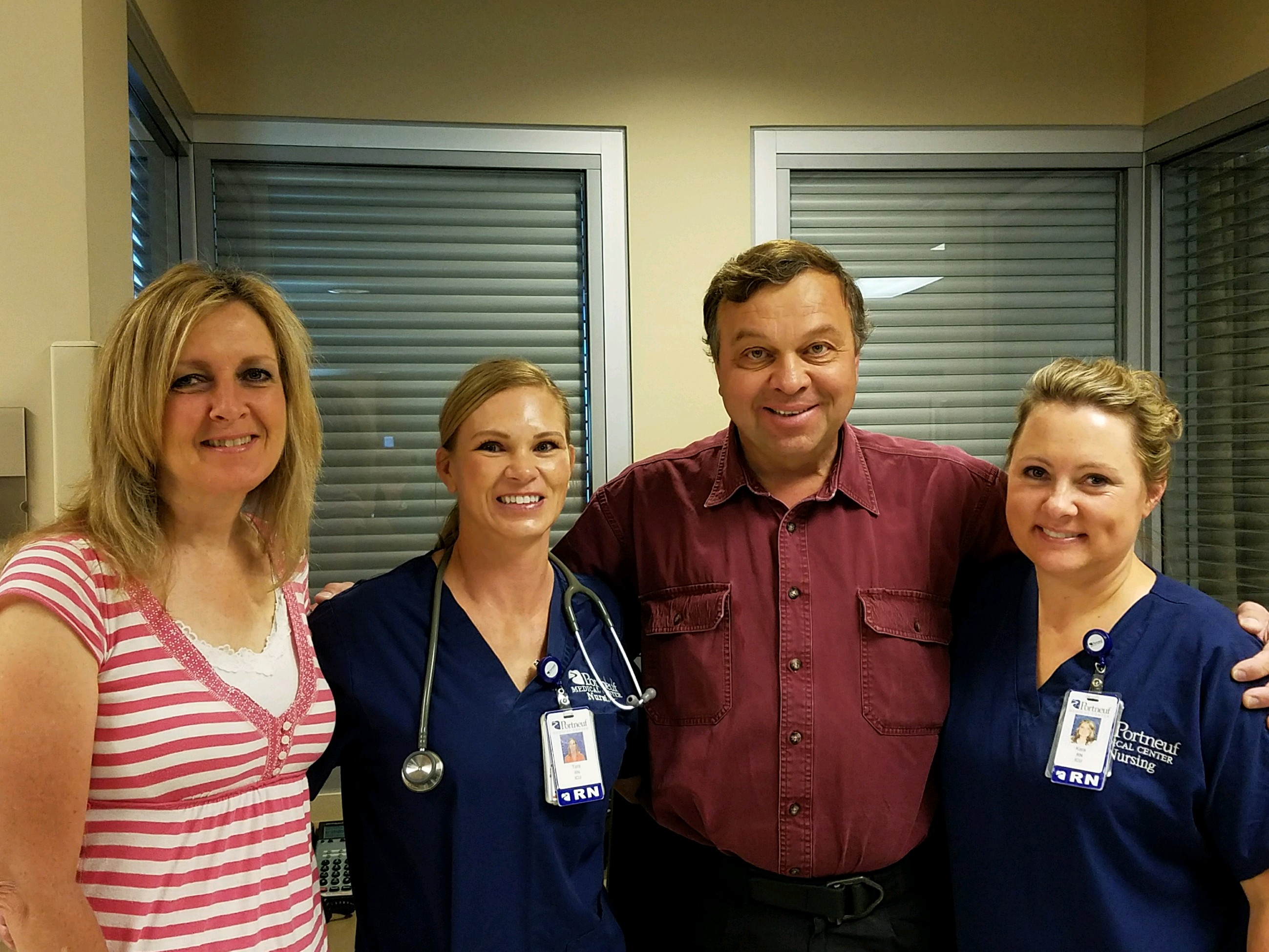 Randy and Terri Hall with ICU Nursing Staff[/caption] “He was dead when we got here,” Terri Hall said. The heart attack of all heart attacks, the widowmaker is a 100% blockage of the left anterior descending (LAD) artery. The consequences of this type of heart attack are often catastrophic, many patients don’t make it to the hospital alive. On Sunday, March 12, Randy Hall was having significant chest pain and asked his wife to drive him to the hospital. The couple was about 35 miles out of town. As they came through the Pocatello/Chubbuck interchange – about 4 miles north of the hospital. Randy stopped breathing. He slumped over and became unresponsive. “I just kept driving,” Terri said. Although she was in quite a panic, she continued to swiftly transport him to our emergency entrance. For the next 20 minutes, Randy did not take a breath. Nurses raced out to the car and started chest compressions as a code blue echoed through the hospital; the cardiac team assembled. Randy was brought inside. “They assigned a guy to me (Rick Gibson, Case Management). He told me what was happening the whole time,” Terri said. “There must have been 20 people all doing everything they could to save his life. Even I was taken care of.” On July 19th, four months later, Randy and his wife, Terri, walk into Portneuf Medical Center. They came for one purpose, to tell the team who cared for him, “Thank you for saving my life!” His choice of days to return was very fortunate as a significant number of people who were part of his incredible care team during his two-week stay were on call that day. Stories, hugs, photos happened while he was reintroduced to care givers from the emergency department, the Intensive Care Unit (ICU) and Dr. Fernando Grigera, his cardiologist. When Randy walked into the emergency room, he said to one of our nurses, Eric Whiteside, “I remember you! I know … I remember you! Do you remember me?” “Yes sir,” Whiteside said. “It was my pleasure to care for you.” Hospitals are places where miracles are welcomed – even the miracle of finding hope in a difficult moment. On that day in March, amid a strong feeling that he may continue to be unresponsive, the gift of skilled hands and of hope brought breath and a renewed journey for Randy and his family. [gallery link="file" size="medium" ids="15305,15311,15310,15309,15307,15308,15306"]