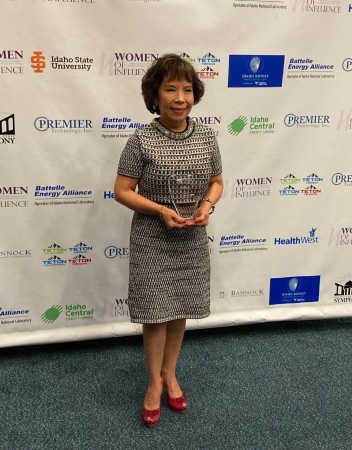 Elizabeth O’Donnell, MD was honored with the Lifetime Achievement Award at the Idaho State Journal’s Women of Influence Awards on December 7, 2022. The prestigious award recognizes Dr. O’Donnell’s service as the medical director of Portneuf Medical Center’s Neonatal Intensive Care Unit (NICU) and years of commitment to growth and innovation.

“This Lifetime Achievement Award validates my belief that consistent, honest hard work pays priceless dividends,” said Dr. O’Donnell, neonatologist at Portneuf Medical Center. “I was humbled when I was announced the award recipient.”

During her tenure at PMC, Dr. O’Donnell has bolstered the NICU program with growth and innovation. The developments to the program include increasing the acuity of care for 23-week gestational neonates; pioneering a multidisciplinary and inclusive NICU service line where the efforts and input of every member of the team are celebrated; creating care conferences for high-risk obstetrics patients, their partner, and the care team to prepare for NICU hospitalization; and implementing a quality improvement project with respiratory therapy and nursing to reduce pneumothorax in neonates.

From 2014 to 2021, PMC’s NICU census has grown. Previously, neonates under 25 weeks needed to be transported to another facility for care. Dr. O’Donnell’s improvements to the program have expanded the capabilities of the NICU to deliver a higher level of care at PMC, keeping families locally and sparing them the added strain of traveling to another city or state for treatment. Now both mom and baby can remain together and baby can receive rapid care. Each program improvement is guided by patient safety in pursuit of better outcomes.

In addition to the impact Dr. O’Donnell has made on patient care in the NICU, she has also had a significant impact on healthcare students and professionals. Her leadership has changed the lives of hundreds of individuals as she has trained and mentored many nurses and physicians over the years. She has mentored WWAMI (five-state medical education program including Washington, Wyoming, Alaska, Montana, and Idaho) students, ISU family medicine residents, PMC’s NICU nurses in their neonatal nurse practitioner program, and many others. Members of the NICU team describe Dr. O’Donnell as inclusive and empowering.

“Leaders are successful because of the people who work with them,” Dr. O’Donnell said. “I am blessed to work with a dedicated, creative, and self-giving team of professionals. This recognition is fittingly a team award!”

Dr. O’Donnell was elected by her peers as Portneuf Medical Staff President Elect and she will take over as Medical Staff President in April 2023. She has previously served two terms as Portneuf’s Women + Children service line chair. She is currently a member of the Women’s Group of Physicians at Portneuf, and she has organized a local group to support female physicians. Dr. O’Donnell’s career reflects a professional who looks outward; she seeks opportunities to serve and uplift those around her.

Dr. O’Donnell’s vision for PMC’s NICU is not complete. She is currently implementing a NICU Developmental Clinic that will offer occupational, physical, and speech-language therapy services at PMC for discharged babies. She is also working with ISU’s Department of Music to add music therapy to the NICU.

In 2023 and beyond, Dr. O’Donnell has plans to expand the NICU’s capabilities with the training and equipment necessary to deliver an even higher level of care for smaller and younger babies. She is aiming to have the NICU equipped to care for infants born at 22 weeks. And Dr. O’Donnell’s commitment to care does not end when patients are discharged. She is looking to establish a program that delivers donated breast milk via drone to babies in the region in need.