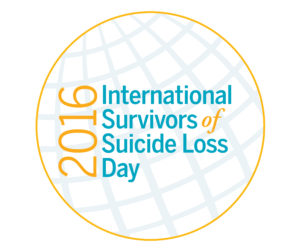 POCATELLO – The American Foundation for Suicide Prevention (AFSP), the nation’s largest suicide prevention organization, is hosting International Survivors of Suicide Loss Day events worldwide on Saturday, Nov. 19, 2016. Survivor Day allows people affected by suicide loss to gather around the world at events in their local communities to find comfort and gain understanding. These events are free and open to the public.

“After I lost my younger brother Raymond to suicide, I felt so alone and guilty about his death. But attending a Survivor Day event allowed me to connect with others who had lost a person close to them, and made me realize I wasn’t alone – that others understood my grief. It was incredibly healing,” said Renae Carapella-Johnson, who lost her younger brother Raymond Carapella to suicide in 2005.

Although Raymond, a consummate prankster known for his sense of humor, might have seemed a healthy high school student, his family, who knew him best, recognized that he struggled with anxiety and depression. They tried to encourage him in his interests, like watching football, creative writing, and cross country running. But in 2005, his life ended abruptly and all too soon. Raymond took his own life.

After Raymond’s suicide, his sister Renae felt alone and lost. It wasn’t until she found AFSP and attended her first Survivor Day event that she began to realize there were others like her, even in her own community, who had experienced a similar loss. When she connected with them at the Survivor Day event in her town, she began to consider what she could do to prevent others from experiencing this kind of grief.

On Survivor Day, Portneuf will host a 90-minute program that will include a film screening of “Life Journeys: Reclaiming Life after Loss,” a new AFSP-produced Survivor Day documentary that traces the grief and healing journey that follows a suicide loss over time. After the screening, there will be a post-screening discussion, facilitated by Portneuf Medical Center Behavioral Health clinical staff, on coping with a suicide loss. This event is free and open to the public. Please join us on Sat, Nov 19 from 10am to noon in the Pebble Creek Room.