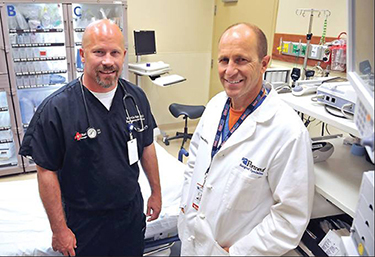 Photo: DOUG LINDLEY/IDAHO STATE JOURNAL Dr. Kurtis Holt and Dr. Drew McRoberts are part of the team at the Portneuf Medical Center in Pocatello that is seeking verification as a Level II Trauma Center.
“The hospital’s mission is to provide world-class care to Eastern Idaho, and if we’re going to provide world-class care, by definition we have to provide good trauma care,” said Dr. Drew McRoberts, trauma director at PMC. McRoberts believes the hospital is already functioning as a Level II Trauma Center. As a result, that verification, if received, won’t change anything in the day-to-day operations, he said. But it will set the hospital apart as a quality caregiver. It’s applying for the verification through the American College of Surgeons’ Committee on Trauma. McRoberts said officials will visit the hospital on Sept. 14 and 15 to determine if they are worthy of that verification. “They look at our outcomes,” he said. He adds that they examine the way the hospital cares for trauma patients and how successful it is in that care. They also look at its performance improvement program, which identifies and corrects any issues there may be at the hospital. “We know that the best trauma care is given by centers that have the best systems in place,” McRoberts said. “(This is not about) one individual providing care, it’s the whole team.” McRoberts said the verification request comes at an important time. The Idaho Legislature recently approved a plan to develop a Time Sensitive Emergency system for the state. And PMC will be designated as the lead hospital in the southeast region — one of six regions in the state. “The timing is perfect,” McRoberts said, adding that the Time Sensitive Emergency system will focus on those calls in which quick response and treatment can make a difference in the outcome. The statewide system of care will focus on three of the top five causes of death in Idaho — trauma, stroke and heart attack — and will address public education and prevention, 911 access, response coordination, hospital care and rehabilitation among other issues, according to www. tse.idaho.gov. The Level II Trauma Center verification will go along with those goals. McRoberts said PMC has already been working to improve public education programs that help prevent trauma emergencies, like falls. The hospital is working with Southeastern Idaho Public Health to teach fall-prevention at assisted living facilities, he said, and it has a free bicycle helmet program for children. “Those are things you wouldn’t see, but we want to do behind the scenes to prevent trauma,” he said. The Level II Trauma Center verification could help the hospital draw more patients, not only for trauma care, but for other services as well, McRoberts said. And he believes the verification and associated requirements would benefit the public too. Numerous studies have shown that the chances of survival are better if trauma patients receive care at a verified trauma center, McRoberts said. “Getting verification is a big deal,” he said.