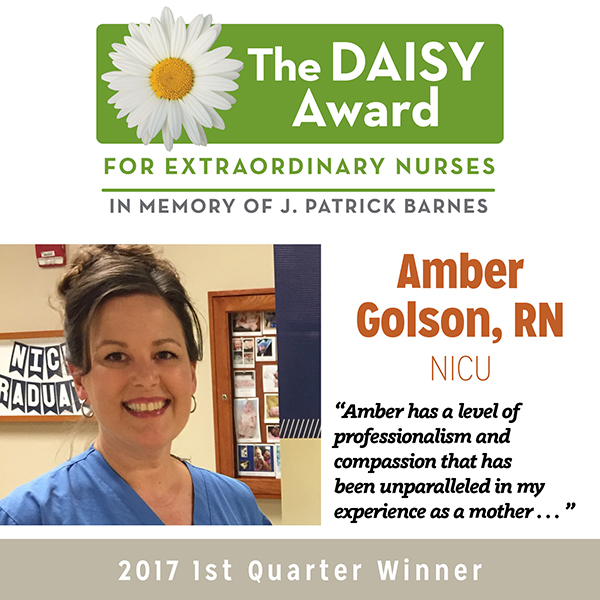 Amber Golson, RN, works in the Neonatal Intensive Care U (NICU) and is our DAISY Award winner for Quarter 1, 2017. Amber works in the NICU and was nominated by a patient. The nomination read:

“The nurse that I have the privilege of nominating I first came to know a year ago when our son was born - October 3, 2015 at just 26 weeks. On October 5, my husband and I received a call that our son was not going to make it, so we headed to the hospital. The memory that stands out to us and which is near and dear to our hearts is watching the NICU doors open to see a tear-filled Amber doing chest compression on our son. Amber was trying to keep Griffin alive so we could see him before he passed. Not only did Amber work with others to keep Griffin here so we could say goodbye, Amber also attended Griffin’s funeral later that week.

Fast forward a year and you can imagine our heartbreak when we were told our son, Colin, born at 35 weeks, would have to go in to the NICU. Although my husband and I were devastated, our hearts were filled with a renewed sense of hope when we saw Amber’s face again taking care of our son. Every single member of the Portneuf Medical staff is exemplary and we are thankful for all that they have done for other families and us. We do not intend to minimize any of the amazing nurses, however, Amber deserves the Daisy Award not only because of the amazing nurse that she is, but for the fact she continues to be consistent in this.

Amber went above and beyond in several cases with our family from attending Griffin’s funeral to enclosing a hat that baby Colin had worn in a bag with a note for me to have while I was waiting for my milk to come in. Amber answered my numerous questions, often the same questions numerous times, without making me feel inferior. Amber communicated so well with us and with the medical staff; she helped explain procedures, plans of care and anything I did not understand. Amber’s level of critical care provided to us can be second only to that given by the actual doctors themselves; Dr. Lawrence and Dr. O’Donnell. Amber has a level of professionalism and compassion that has been unparalleled in my experience as a mother of three NICU babies in two different states.”